Coming to see Lisbon? You may have struggle to choose what to see there. Let’s have a look on the list of 7 the most interesting things for tourist. All of them you can see with Best Life Experience, so, are you ready?

This is the spot you just cannot miss when you visit Lisbon – it’s kind of its trademark.  Dated on XVI century, it was built on the northern bank of the Tagus as a part of estuary defence system. It is a perfect example of the Manueline style – highly decorative, carved stone maritime motifs combined with North African and Italian architectural influences. Belem tower serves as a monument to Portugal’s Age of Discovery on both land and sea and in 1983 UNESCO classified it as “Cultural Heritage of Humanity”.

Located on the peak of the São Jorge hill it is another monument which is one of Lisbona’s finest. It was built by the Visigoths, then modified by the Moors around 11th century. Later transformed into a Royal Palace. Between 13th and 16th century was occupied by the Kings of Portugal as well as the Bishop. The castle has 11 towers which are in surprisingly good condition, surrounded by its external walls. Moreover, the castle survived one major earthquake. From the Castelo you can observe beautiful views over Lisbon, especially from the courtyard area.

It is called as well Hieronymites Monastery. Designed by the Portuguese architect Diogo de Boitaca in the Manueline style (Portuguese late Gothic) to commemorate the return of Vasco da Gama from India. Inside very unique Church of Santa Maria you will find the tombs of Vasco da Gama and Luís de Camões, a Portuguese poet and writer. Without the doubt, the Monastery is architectural masterpiece with valued ceilings and sophisticated decorative elements.

When you walk small, charming streets of Lisbon you will see that Portugal has a clear sweet tooth. It is impossible to ignore all bakeries and pastry shops where all windows will call you with all good looking and yummy delights. And there is no way to ignore the most known Pastel de nata. Did you know that tradition of preparing this dessert is dating back 300 years to Belém created by monks in the Jerónimos Monastery? It is safe to say you will taste the history with every bite of this dessert.  What’s exactly Pastel de nata? It is something similar to tart – outside is crispy, inside though has amazing, sweet egg filling with consistency of pudding. But there’s no words to describe it – you have to just taste it!

One of the most beautiful parts of Lisbon. You can try to see it from Miradouro de Santa Luzia but we recommend to be there. Narrow, climatic streets, sleepy atmosphere it’s something that will make you feel so relaxed. Alfama is the oldest district of Lisbon and is placed at the bottom of Castelo de São Jorge – castle.

So picturesque, located in the Sintra hills, the Park and Palace of Pena are the one of greatest buildings built in the 19th century and it’s a palace which combines two styles – Manueline and Moorish ones. It is a mix of vividly painted terraces, mythological statues and decorative battlements.  The palace is painted with different colors that are part of history and different influences – and it’s visible on mashing up towers, facades, and architectural flourishes on multiple buildings. The red color is the oldest section, dating to the 15th-century while the yellow elements are from Moorish influences and the blue structures from Manueline style, were later added. Moreover the palace is surrounded by beautiful forest and garden, that have many different species of plants and add this charming view from the palace’s terraces.

Visiting Sintra means that you definitely should see the most westerly point of mailand Europe. You will have amazing view over the Serra de Sintra and the coast. In the 17th century Cabo de Roca served as a fort which played important role in guarding the entrance to Lisbon, especially during Peninsular Wars. Nowadays, it’s still important point of navigation as it has the lighthouse. 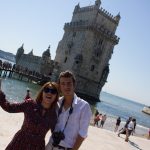 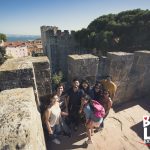 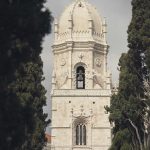 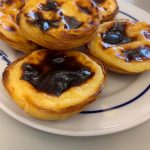 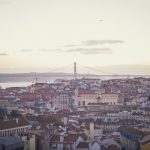 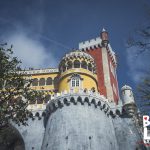 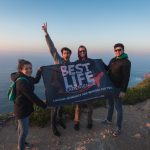